Atlanta couple shares story of their love and trans pregnancy 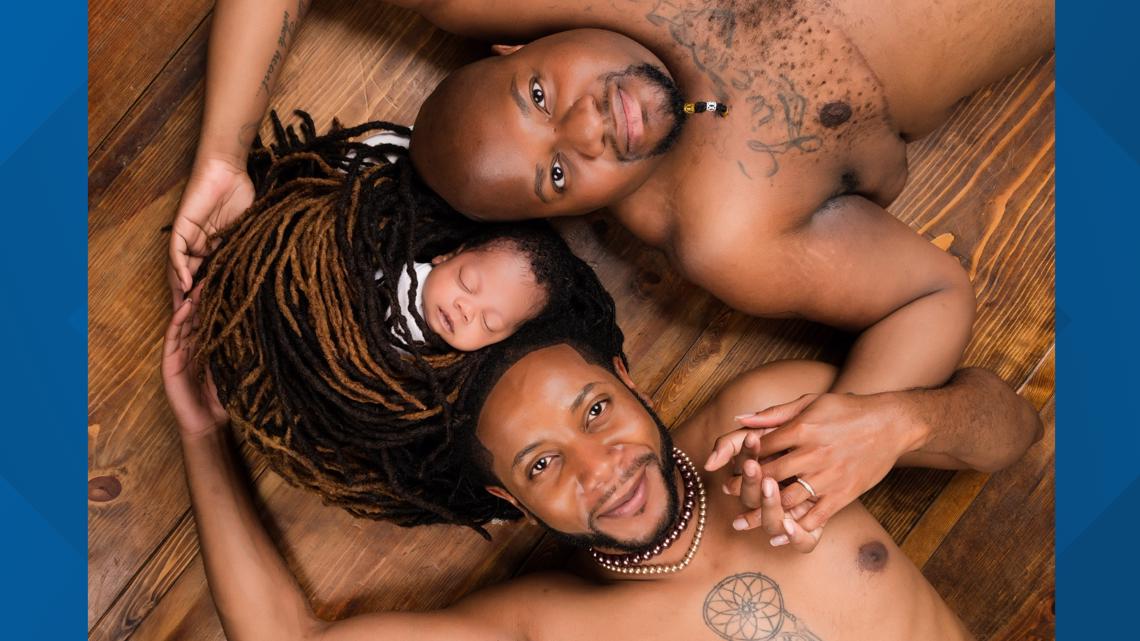 “Being a pregnant man was actually quite difficult for me. It was very challenging because now all of a sudden, people who had understood my identity now were questioning me about my own identity. And so I began to question myself,” Ja’Mel Ware, of Atlanta, said.

11Alive continues to honor all communities through its Voices For Equality series. This is the story of one family’s pregnancy journey.

‘ I realized that I could not continue to live my life for other people’:

Four years ago, Ja’Mel Ware and Alphonso Mills were merely strangers who ended up attending their church’s annual conference.

“And so he walked in and he was like, ‘Hey I’m looking for someone, so do you know where they are?’ I was like, ‘I don’t know who you’re looking for, but who are you?'” Mills said, smiling, of their interaction together.

Little did they know that this brief moment, and a few more over social media in the passing months, would lead them to a new chapter in their lives: finding love.

“We found each other on Facebook, added each other there within messages. Every now and then we like each other’s posts. But it wasn’t for a couple of months that Ja’Mel had a get-together that he had gotten,” Mills said. “It was like, you know, ‘Hey come out and just kind of chill with us.’ It was at a nice wine shop and he invited me. And at first I was just kind of like, you know, I don’t know if I’m going to to be able to make it. And I ended up being the first person to walk in.”

The couple has been inseparable since.

“There was a level of honesty from our very first date that I never experienced with anyone else,” Ware said.


However, their budding bond did not come without some challenges and life lessons.

“The more obvious things to people that know us would be that I’ve only ever dated women, and Alphonso is a masculine of center human,” Ware told 11Alive.

“And I had never been with a trans man before, so that was something very new to me,” Mills added.

Yet, neither were strangers to traveling in uncharted waters throughout their lifetimes.

Ware was assigned female at birth and came out around the age of 14. As time went on, he realized who he truly was.

“My mother died when I was 15 and about three months before she died, she started telling me that all boys grow differently, and I had no idea what she meant,” he said. “But she started telling me the origin story of my name and my mother named me Ashley Ja’mel and she said she wanted to give me the autonomy to decide who I would be, because she always felt there were two spirits inside of me.”

Ware began his transition as a young adult.

“I started reading and learning about what it meant – what gender identity and what transgender meant – and I decided I didn’t want to transition because I wanted my family to be at my college graduation,” he said. “But once I graduated and they were there, I realized I that I could not continue to live my life for other people.”

For Mills, coming out was a series of chapters as well.

“So I set my parents down who are divorced at the time, and my little brother, and said, ‘Hey I’m gay. I’ve been through some abusive relationships and I am also living with HIV,'” Mills said of coming out after a research study at Emory revealed a preliminary positive HIV diagnosis in 2012. “So my coming out experience – it was heavy. It was a lot. But I will say on the other side of it, after two hours of crying and all of the emotions and stuff, they were supportive and they were like ‘You know you’re my child, you’re my brother. I am here for you. We want to support you.'”

The level of “unknown” someone may face after receiving that three-letter diagnosis wasn’t foreign to Ware.

He was born HIV-positive in the late 1980s and faced his own battles in early childhood.

“I grew up in Detroit and my mother wanted me to go to private school, but I kept being denied admission to these schools,” he said. “And so she sat me down to talk to me about why I was being denied. She wanted me to know that I was smart, that I was capable, but people didn’t understand that we lived with HIV. They didn’t understand what that was.”


Mills and Ware may have found each other as strangers, but the pair was quickly able to bridge any uncertainty through similar and different life experiences.

As a result, the couple said no one can deny their love or the life they’ve built together since.

“Falling in love with Ja’Mel taught me so much about myself. It allowed me to open up my mind and realize it’s not just about body parts,” Mills said.

“I would tell younger LGBT folks that love is possible,” Ware added. “No matter how you identify – you are worthy of love.”

God has been at the forefront of their relationship since day one.

“I always wanted a family. I thought my wife would carry our child and then I met Alphonso and my understanding of love started to shift,” Ware said.

By the start of the pandemic, they were well established in their relationship and ready to start a new journey together: having a child.

The family turned to God for answers.

“I’m a true believer that God gives you a path and God directs you on the path,” Ware said. “And this is the path that God gave me.”

The couple wasn’t sure how long it would take to become pregnant, and Ware stopped taking his testosterone in November 2020.

To their surprise, they were blessed with a positive pregnancy test in a matter of months.


“What I found was there is a community of seahorse dads,” Ware told 11Alive of being pregnant. “So, we call ourselves seahorse dads, because seahorses are the only species known where the dads have the babies, and there are actually tons of us around the world.”

Finding that community was important to their family, according to Ware, because families like theirs may turn to complete privacy out of fear for how the world will react to their own stories of having children.

“Being a pregnant man was actually quite difficult for me,” Ware said. “It was very challenging, because now all of a sudden people who had understood my identity were now questioning me about my own identity, and so I began questioning myself.”

While the family did spend some time in seclusion at first, they quickly realized how important it was to live in their truth.

“I didn’t know I could still follow my dreams, hopes and my desires if I was to transition but I proved that part to myself,” Ware added. “But I also wasn’t very visible in the beginning of my transition either. So, I knew that this time I had to make a decision. I had to decide if I was going to do this in the privacy for the sake of my family, or if I was going to live out the purpose I was given.”

That level of visibility and transparency became a centerpiece for the soon-to-be parents, as it represented a new level of advocacy for transgender rights and experiencing affirming healthcare.

“What I learned in the eight months of pregnancy is that people are actually more willing to learn than I was afraid they would be. People want to understand things, specifically medical professionals. They want to be able to give good care to people,” Ware said. “But however, I think that people come in so guarded — so afraid, so untrusting of the medical care system — that they don’t advocate for themselves or they don’t show up at all.”

The duo continued to openly invite these conversations throughout the remainder of their journey to bring new life into the world.

“I decided to be that face, to show up to talk to nurses, to talk to doctors, to talk to the people who were delivering the food to the room, saying ‘I know this is different. I know this says mother [and] baby, and here I am,'” Ware said.


‘We don’t always think about what’s going to happen after us’:

For the couple, having their child means more to them than simply starting a family.

“I really want the younger LGBTQ community to look at us and say, ‘I can create a legacy. I can create something that’s going to live longer than me,'” Ware told 11Alive.


Finding continued support through their communities has also been crucially important in their lives as time has gone on.

“We like to talk about boxes all of the time, but also don’t let them limit the ideas and aspirations you have for yourself,” Ware added. “My love live out loud, live boldly. Be who you are, however you see fit, and do it in the healthiest way possible.”