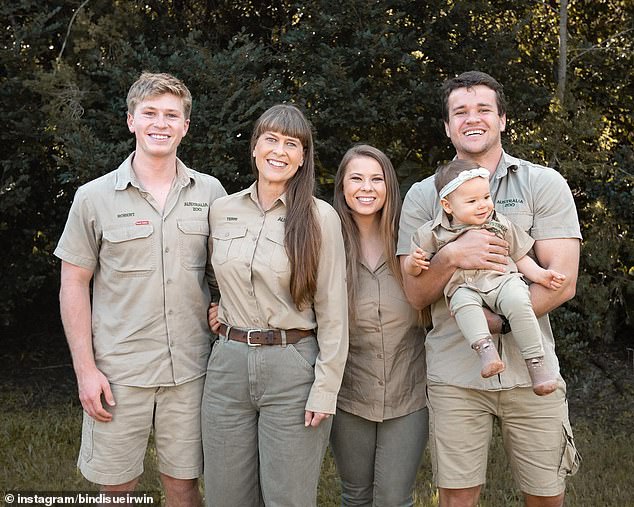 Bindi Irwin’s fans go wild over her sweet family photo amid claims she is ‘pregnant with baby number two’: ‘You are all so blessed’

Bindi Irwin fans have gushed over the star’s latest family photo amid rumours she is expecting her second child.

The Wildlife Warrior, 24, shared a photo alongside brother Robert, mother Terri, husband Chandler and her daughter Grace Warrior on Tuesday – with the famous clan all beaming.

‘Such a beautiful family. Each of you are beautiful inside and out. You are all so blessed,’ one wrote.

Bindi Irwin fans have gushed over her family in her latest photo amid claims from she is ‘pregnant with baby number two’ and just weeks away from making a formal announcement. Pictured: Robert, Terri, Bindi, Chandler, and Grace

It comes amid rumours Bindi is pregnant and will soon make an announcement alongside husband, Chandler.

The couple celebrated Chandler’s 26th birthday on November 14, with the eagle-eyed followers pointing out Bindi was hiding her stomach behind a strategically-placed birthday cake.

Woman’s Day sources close to the pair have alleged the lovebirds will be announcing the big news ‘any day now’. 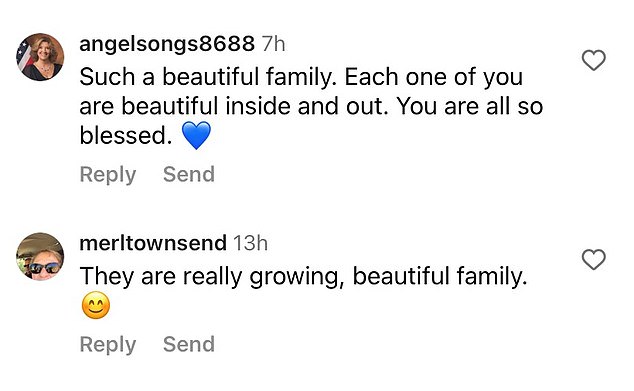 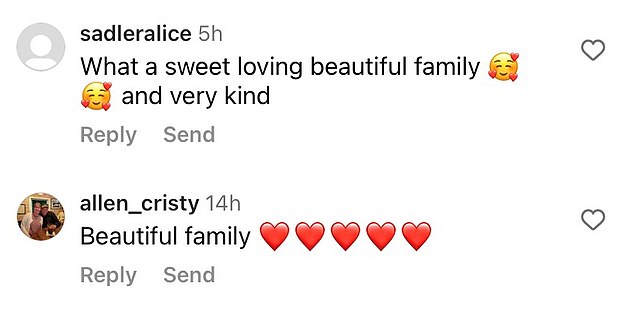 Fans gushed over the ‘beautiful family’ in the social media photos, amid increased speculation the pair will soon announce a second pregnancy

The publication alleged the conservationist duo were waiting for Chandler’s US-based parents, Chris and Shanna, to arrive in Australia for his birthday to spill the happy news to them first.

‘They’re hoping to officially announce another baby is on the way any day now,’ an insider allegedly told the publication.

‘They also can’t wait to give Grace a sibling close in age. They really want a boy, given that both Bindi and Chandler grew up with a brother each and loved it.’ 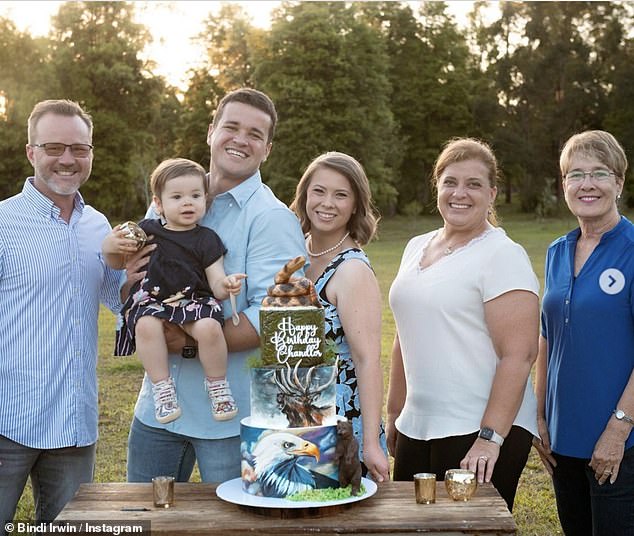 The couple celebrated Chandler’s 26th birthday on November 14, with fans pointing out Bindi was hiding her stomach behind a strategically-placed birthday cake. Pictured here with his family from Florida

The insider went on to claim that ‘Bindi’s sad the infant months are over’ and is hoping to give her 20-month-old daughter Grace Warrior a sibling ‘sooner rather than later’.

‘Bindi’s already hinted to her mum that she might be a grandma for the second time and [her mum] Terri’s over the moon at the mere thought of it,’ they claimed.

Fans wildly speculated about a potential pregnancy when Bindi hid her belly behind her husband’s birthday cake in their Instagram photos. 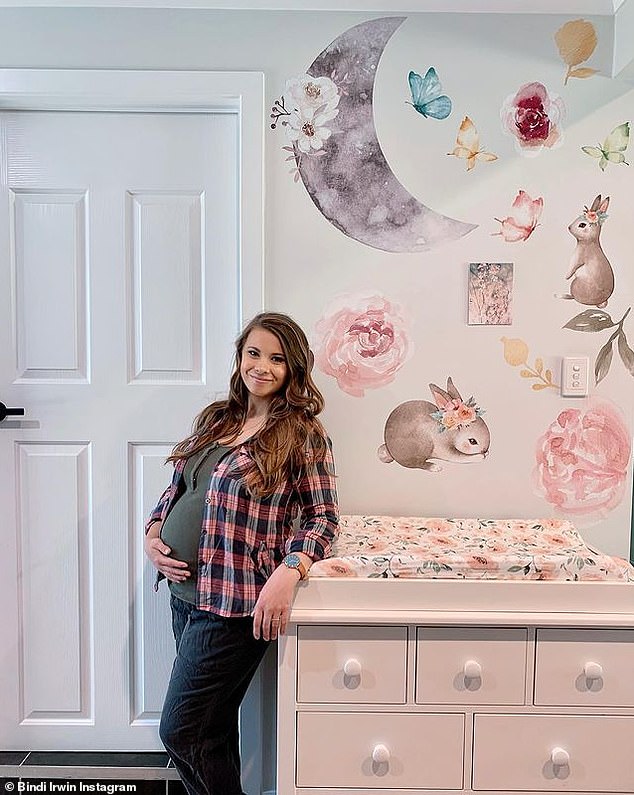 Sources close to the pair have alleged the lovebirds will be announcing the big news ‘any day now’. Pictured: Bindi when she was pregnant with Grace

The couple posed for photos at The Crocodile Lounge in Queensland alongside Chandler’s family from Florida as he held baby Grace.

In all the photos, Bindi strategically stood with her belly covered by the three tiered birthday cake decorated with wild animals.

‘There is 100% a bun in that oven,’ one fan wrote, while another said: ‘Looks like Bindi is hiding something behind that cake!’ 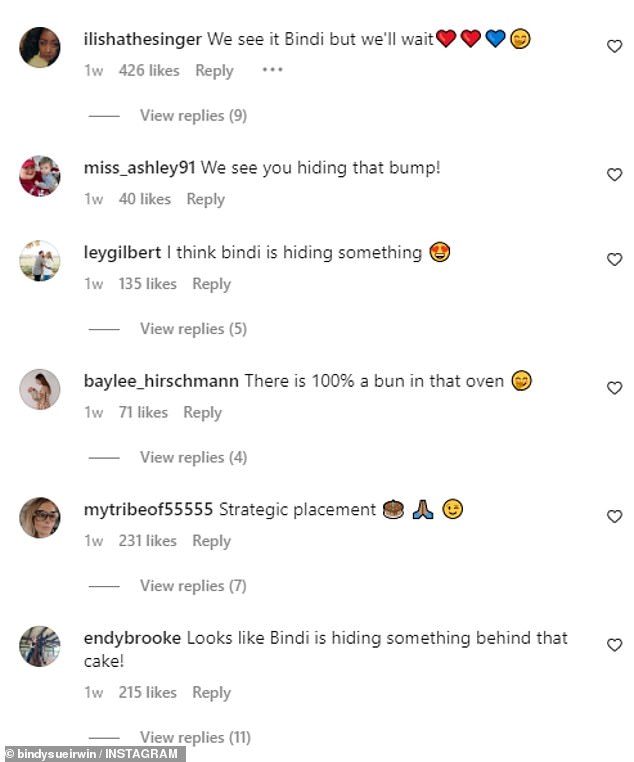 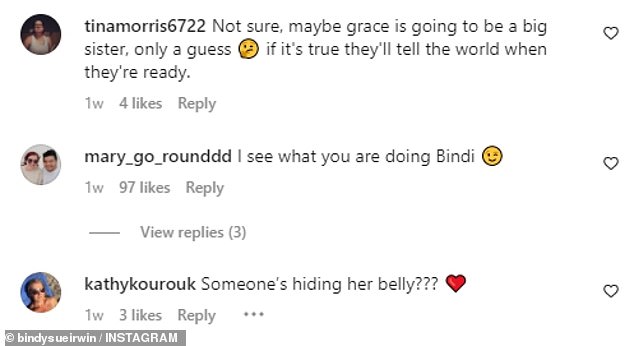 Another commented: ‘Am I paranoid, or is Bindi hiding her stomach in every pic? Lol happy birthday chandler!’

‘Not sure, maybe grace is going to be a big sister, only a guess. If it’s true they’ll tell the world when they’re ready,’ someone else said.

Daily Mail Australia has reached out to Australia Zoo for comment. 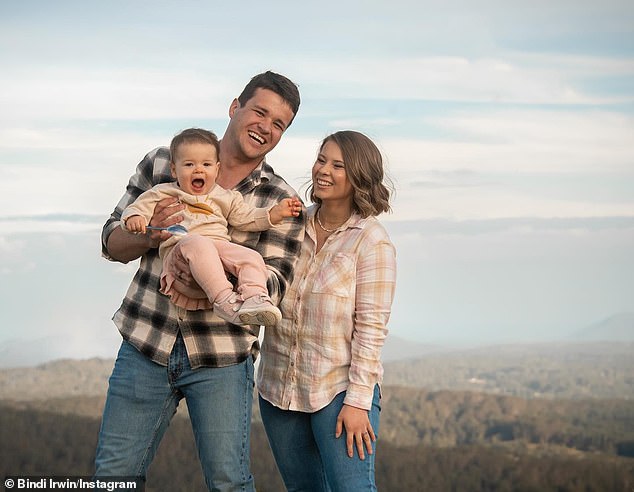