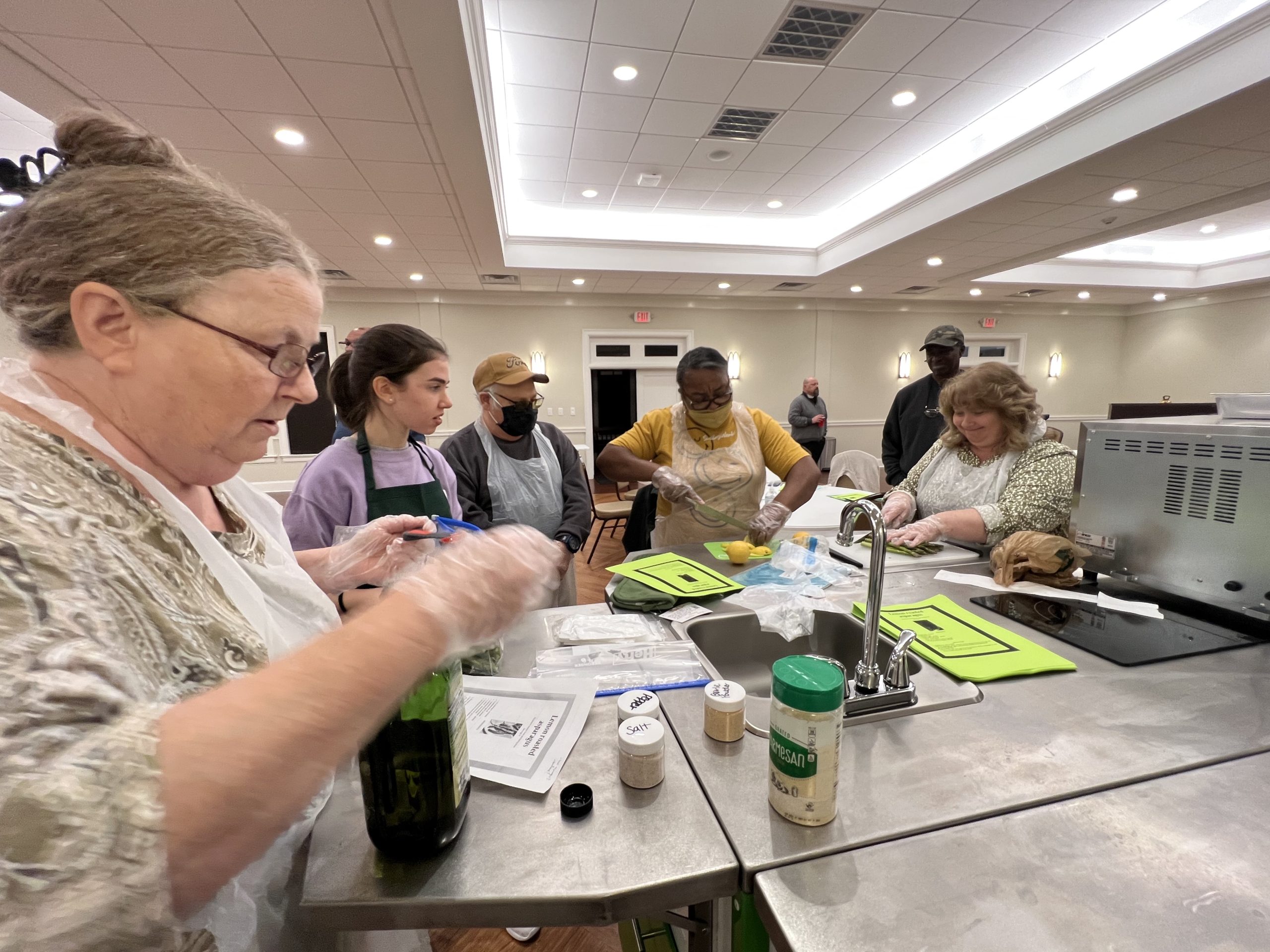 Health care providers have traditionally written prescriptions for medications, for exercise, for therapy, even for relaxation for their patients. So to combat obesity and poor nutrition, why not give patients a prescription to help them eat better?

Such food prescriptions — delivered to patients in the form of vouchers that can help patients get access to more fresh fruits and vegetables — are becoming increasingly popular across the U.S.

Lauren Sastre, a professor in the Department of Nutrition Science at East Carolina University, saw the promise of food prescription programs in fall 2018 when she started researching their implementation. While she considered them helpful, Sastre didn’t think they went far enough in breaking down barriers to getting healthy food.

For one, she said, transportation issues persist — especially in rural areas. Additionally, the amounts of fresh food offered aren’t often substantial enough to meet nutrition recommendations. For example, in some cases the allotted funds would only cover the cost of a tomato and a cucumber.

“If you don’t have access to healthy food, you can’t eat well, period,” Sastre said. “So that’s step one. But there needs to be more than step one. We don’t have Home Ec anymore. We’re not teaching people how to prepare things from scratch. The idea that people are going to take this produce home and cook it and eat it — there has to be some level of support in place for that.”

None of these elements is groundbreaking by itself, Sastre said. It’s the combination that’s significant.

“I’ve never seen a program that has them all offered at the same time and … intentionally integrated,” she said. “Our cooking aligns with the food we know we’re giving out. Our health coaches touch base with their patients and see how they’re working with that food and if they have questions or want more recipe ideas.”

The elements together create a synergy, Sastre said, that maximizes health improvements. Patients gain access, confidence and support to create real behavioral and lifestyle changes needed to manage their diabetes.

Data from the American Diabetes Association

Funded by a three-year, $365,000 grant from The Duke Endowment, Sastre partnered with the North Carolina Association of Free and Charitable Clinics to offer Fresh Start to low-income, uninsured patients with diabetes at several clinics in the eastern part of the state.

April Cook, CEO of the North Carolina Association of Free and Charitable Clinics, said diabetes is prevalent among patients at its 71 member clinics across the state. She said about 40 percent of the total patients served have diabetes.

People with low incomes suffer disproportionately from diet-related chronic diseases, such as diabetes, and have fewer resources to manage their diseases. Food insecurity is recognized as a common risk factor for developing type 2 diabetes (which used to be known as “adult onset diabetes”) and is a contributor to socioeconomic, racial and ethnic disparities in diabetes outcomes.

Cook said patients served at free and charitable clinics are often newly diagnosed or will get diagnosed with diabetes there for the first time. She said many patients come in with glycemic levels, a measurement known as hemoglobin A1C, as high as 15 percent, when the normal level should be below 5.7 percent. The A1C measurement reflects a person’s blood sugar measurements over time.

Living for a long time with high blood sugar levels has major health implications, including loss of eyesight, kidney disease and nerve damage.

Diabetes is an expensive chronic disease. People with diabetes pay approximately 2.3 times more in medical expenses than those who do not have the disease, according to the American Diabetes Association. The organization estimates that diagnosed diabetes costs North Carolina about $10.6 billion each year — a combination of direct medical costs and indirect costs from lost productivity.

Cook said patients often don’t realize how bad they feel until they start making improvements. But making those improvements comes with extra challenges for low-income patient populations. One of the best ways to control blood glucose level is to eat healthier, but that is more expensive.

“It’s really sad to think that you want to provide the best that you can for your family and your children — and knowing that the things that are more nutritious, healthier, are out of reach for you,” Cook said, noting that’s the reality for many folks.

Kelli Corbett, lead nurse practitioner at Wayne Action Teams for Community Health clinic in Wayne County, said she always advises her patients to shop on the perimeter of the grocery store where the fresh, unprocessed options are. She consistently hears that it’s a struggle. One patient told her they could only afford to eat peanut butter and jelly sandwiches until their next check.

Cook said the grant-funded partnership with Sastre is a game-changer for the clinics’ patients in providing healthy food as well as education and cooking skills. What patients learn can then be  shared with other members of their households and families, helping to create systemic change.

“You can throw money at it through medicine all you want,” Cook said. “But if you don’t start addressing the social determinants that surround someone’s health, it’s not as easy to have an impact.”

In its first year, Fresh Start served 56 patients from two clinics with diabetes.

The researchers saw results, even in the few months of the program. Patients’ levels of hemoglobin A1C decreased by an average 1.21 percent. For those who attended at least four group classes, blood sugar levels decreased even further, by an average of 1.87 percent. Food literacy also improved.

This year, the program is planning to triple its scope, expanding to serve around 150 patients at five clinics in Eastern North Carolina.

“All the education that we provide in the health care arena is somebody standing up talking to a patient that’s sitting down, and we’re just lecturing them essentially,” Harmon said. “Maybe about 50 percent of that is actually received by the patient.

“With the Fresh Start program, it’s interactive. The patients get up. They move. There’s a cooking demonstration. There’s sights. There’s smells.”

A main appeal of participating in the program is the ability to taste food at the end of class, he said. Patients like the immediate feedback of determining whether it’s a vegetable they like and would consider including in their diet.

“Being able to show them that you can add vegetables into things — you can season them, you can make them taste better than what they seem — is very cool, and [so is] seeing them get excited about it,” said Brooke Gillespie, a senior at ECU who helped with recipe development last year and is now serving as program coordinator.

In addition to exposing patients to new foods, Fresh Start is making an intentional effort to tailor some recipes and educational materials to the cultural preferences of its Latino patients. For example, a handout on how much sugar is in drinks will include Mexican sodas and juices found in a typical Latino store.

On the calls, she helped patients set physical activity and diet goals and checked in on their progress. For example, one of her patients started out drinking three regular soft drinks a day, but she slowly cut the number and switched to diet soft drinks by the end of the program.

“Patients shared that that kind of one-on-one, consistent support was something they hadn’t received before, and that was the piece that helped them stay motivated and stay on their goals,” Elliott said. “Behavior change is really hard without that — someone holding you accountable and checking in and doing it in a compassionate way.”

By the end of the monthslong Fresh Start program, progression is noticeable in patients.

Sastre recalls one patient with consistently elevated blood sugar who was starting to lose his eyesight at the beginning of the program. By the end, he expressed how much better he could see — a result of the diet changes he implemented from the program.

Where Fresh Start produce comes from

Fresh Start’s food prescription program relies on donated, un-sold local produce. This is possible through Fresh Start’s partnership with the Society of St. Andrew, an organization that works with farmers to collect fresh produce they are unable to sell and then distribute it to groups in the community that help people who are food insecure.

Michael Binger, regional director for North Carolina and South Carolina at the Society of St. Andrew, said when he gets a call from a farmer donating produce in Eastern North Carolina, he calls Fresh Start, which sends volunteers to harvest the fields. Most of the produce is sourced from 10 farms and then transported and distributed to patients during the next group class.

Fresh Start recovered more than 2,000 pounds of produce last year from North Carolina fields. The Society of St. Andrew will connect Fresh Start with more produce this year to accommodate the increased patient volume, and Binger said obtaining the larger amount of food won’t be a problem.

Binger said there’s an abundance of healthy, edible food that never makes it out of the fields every year. The issue is often getting produce from where it is to the people who need it.

Republish our articles for free, online or in print, under a Creative Commons license.

You are free to use NC Health News content under the following conditions: