The Availability and Use of Medication Abortion 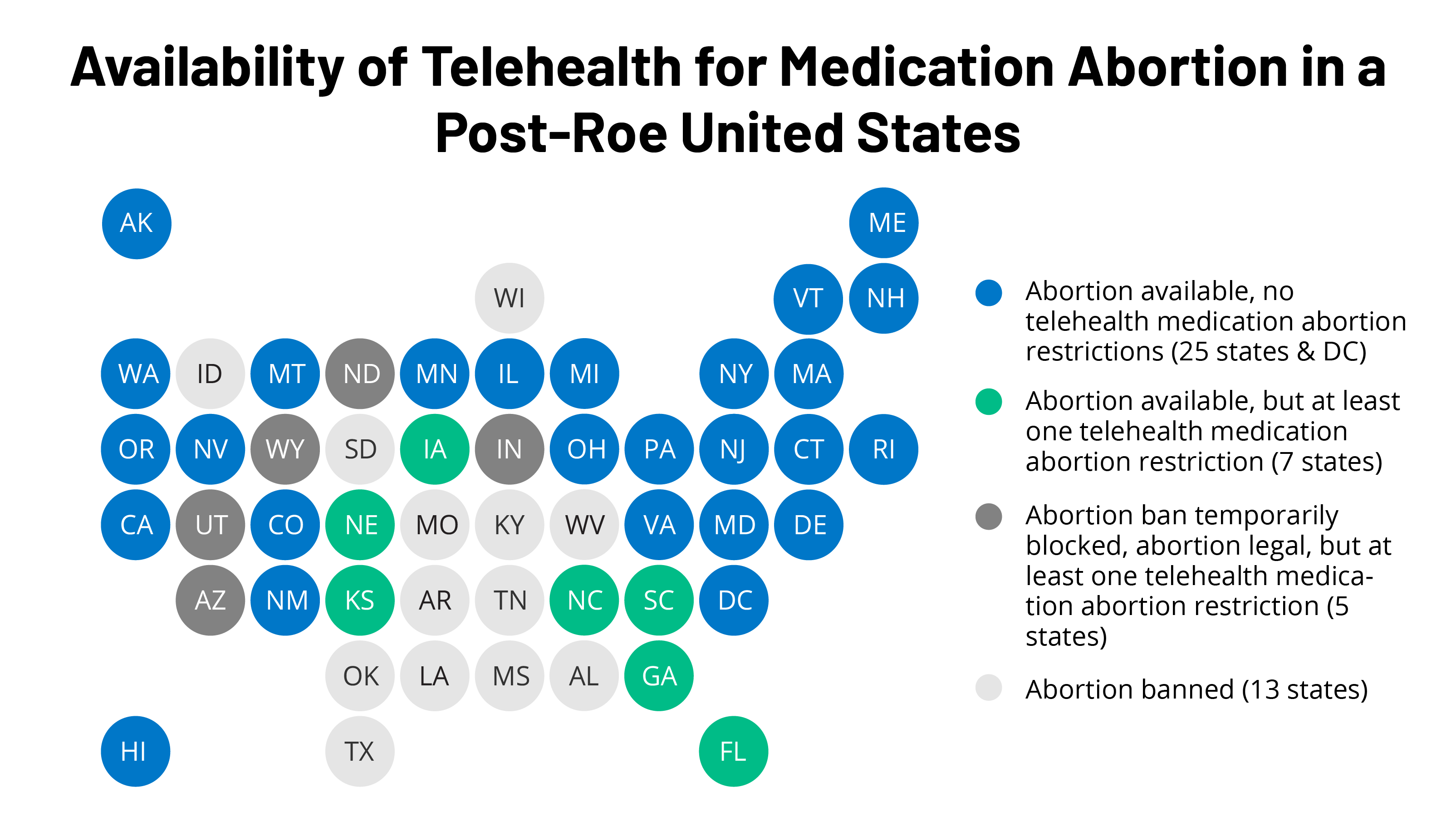 On June 24th, 2022, the Supreme Court ruled on the Dobbs v. Jackson Women’s Health Organization, overturning Roe v. Wade. States can now set their own policies protecting or banning abortion without any federal standard protecting access to abortion. This has created a new focus on medication abortion as an option for expanding access to people facing barriers to abortion care.

Medication abortion, also known as medical abortion or abortion with pills, is a pregnancy termination protocol that involves taking two different drugs, Mifepristone and misoprostol, that can be safely used up to the first 70 days (10 weeks) of pregnancy according to the U.S. Food and Drug Administration (FDA).  The World Health Organization has authorized use to 12 weeks of pregnancy. Since the FDA first approved the drug in 2000, its use in the United States has quickly grown. By 2021, over half of abortions in the US were medication abortions. The medication abortion drug regimen approved by the FDA is available in many states across the nation, however, dispensing these pills for the purpose of terminating a pregnancy is now banned in some states. This factsheet provides an overview of medication abortion, how it is used and regulated, the role of the drug in self-managed abortions, and an analysis of the intersection of federal and state regulations pertaining to its provision and coverage.

What is a Medication Abortion?

The most common medication abortion regimen in the United States involves the use of two different medications: mifepristone and misoprostol. Mifepristone, also known as the abortion pill, or RU-486 is sold under the brand name Mifeprex and through a generic manufactured by GenBioPro in the United States. Mifepristone works by blocking progesterone, a hormone essential to the development of a pregnancy, and thereby preventing an existing pregnancy from progressing. Misoprostol, taken 24–48 hours after mifepristone, works to empty the uterus by causing cramping and bleeding, similar to an early miscarriage. A follow-up visit can be scheduled a week or two later, to confirm that the pregnancy was terminated via ultrasound or blood test. The FDA has found that medication abortion is a safe and highly effective method of pregnancy termination. When taken, medication abortion successfully terminates the pregnancy 99.6% of the time, with a 0.4% risk of major complications, and an associated mortality rate of less than 0.001 percent (0.00064%).

The FDA first approved Mifeprex in 2000. In 2016, the FDA updated and approved a new evidence-based regimen and drug label, which guides current clinical practice. This regimen approves use of medical abortions for up to 70 days (10 weeks) of pregnancy (Table 1). Until 2019, mifepristone was only sold under the brand name Mifeprex, manufactured by Danco Laboratories. In 2019, the FDA approved GenBioPro, Inc.’s application for generic mifepristone.

In 2011, the FDA added a Risk Evaluation and Mitigation Strategy (REMS) to the dispensing requirements for mifepristone permitting only medical providers who had obtained certification from the manufacturer to prescribe and directly dispense the drug. This requirement has had the effect of limiting the number of clinicians able to prescribe medication abortions, but also necessitated an in-person visit to a health care setting and meant patients could not obtain the medication from a retail pharmacy or by mail.

On December 16, 2021, the FDA removed the in-person dispensing requirement for mifepristone and expanded the distribution to include certified pharmacies in addition to certified clinicians. This change removed the requirement to dispense the medication in person and expanded the opportunity for telehealth in states that have not banned abortion. Despite the change to the in-person requirement, prescribers are still required to be certified by the manufacturers. On January 3, 2023, the FDA approved a protocol for pharmacies, allowing those that have been certified by the manufacturers to dispense mifepristone directly to patients. Table 2 shows the change in REMS from 2011 to 2021.

State laws that ban or restrict abortion apply to medication abortion just as they apply to abortion procedures. There are currently large swaths of the country, mostly in the South and Midwest that ban abortion. Even though the federal FDA has approved mifepristone as safe and effective, following the Dobbs decision, the availability of medication abortion today depends on state laws. Even before the Dobbs decision, however, some states restricted access to medication abortion either by blocking the use of telehealth abortions by mandating in-person visits for abortions, imposing requirements for in-person dispensing, or limiting the kinds of clinicians who could dispense the pills (only permitting MDs to dispense). In many states these laws are now superseded by state laws that ban abortion.

There are other ways that state laws also affect use of and access to medication abortion. Some states require that patients be counseled about unsubstantiated claims about the ability to reverse an abortion after mifepristone is ingested.  For example, Nebraska, a state that hasn’t banned abortion, requires patients to be counselled that medication abortion may be reversed if given a high dose of progesterone after taking mifepristone—despite a lack of scientific evidence to support this claim. Similarly, Utah requires counseling that mifepristone alone is not always effective in ending a pregnancy and that patients may still have a viable pregnancy after taking mifepristone despite its record of effectiveness. Similar laws were passed in Arizona, North Dakota, and Kansas, with courts blocking the laws in Arizona and North Dakota, and the Governor vetoing the bill in Kansas. Prior to banning abortion Arkansas, Idaho, Kentucky,  Oklahoma, South Dakota had similar requirements. Research demonstrates that APCs, such as nurse practitioners, physician assistants, or nurse-midwives, can dispense abortion pills as safely as physicians can, but they are only permitted to do so in 20 states and DC.

Telehealth can be used to expand access to health services in areas where the number of clinicians who provide abortion care is limited. Many patients, particularly those who live in rural communities, must travel long distances to obtain abortion services even in states where abortion is still permitted, which has raised interest in the potential of telehealth to expand access medication abortion. Because the updated FDA label now allows for telehealth, mifepristone has emerged as an option for patients who are either unable to travel to clinic or for other reasons wish to have an abortion in the privacy of their own home, if permitted by state law.

According to a recent study, the median self-pay price for medication abortion significantly increased from $495 in 2017 to $560 in 2020. Although Danco Laboratories does not make the cost of Mifeprex public, providers report that Mifeprex pills alone cost them around $90 a pill. GenBioPro, the manufacturer of the generic mifepristone drug also does not report the cost of their pill but has stated that they want to drive down costs for those who choose medication abortion. Private insurance coverage of abortion services is variable and depends on the type of insurance plan, the policy holder’s state of residence, and employer coverage decisions. Federal Medicaid funding only pays for abortions when the pregnancy is a result of rape or incest or a threat to the pregnant person’s life. Sixteen states have opted to use their own state funds to pay for abortions, including medication abortions, for Medicaid enrollees. For those who do not have abortion coverage, there are limited means of financial support, promoted on both Danco and GenBioPro’s website. The National Abortion Federation, as well as local abortion funds are sometimes able to cover some of the cost of an abortion (including travel) for a pregnant person. Outside of these funding sources or a sliding fee scale clinic, there are few options to help with abortion costs.

Self-managed abortion, sometimes referenced as “self-induced” or “at-home” abortion, is when a person ends a pregnancy outside the medical care setting, typically by ordering abortion pills online. Patients may seek to manage their own abortion for many reasons, including state bans, clinic access barriers, cost, transportation, time limitations, and privacy. There are different medication protocols that can be used for a self-managed abortion. As detailed in this JAMA review, an individual can take the FDA-approved medication abortion regimen of mifepristone and misoprostol pills or misoprostol pills alone.

There are a number of companies that offer self-managed abortion services using different approaches. Some companies have a clinician that reviews a customer’s medical information and may have a telehealth visit. Other companies, such as AidAccess based outside the United States, will mail abortion medications to an individual without requiring a clinician visit. Plan C Pills operates a website that provides a list of online retailers in every state and includes information about clinician involvement, price, ship time, product quality, as well as information about how to take the drugs and resources for financing assistance. Prices differ between companies, but typically costs are lower than average charges for a clinic abortion as there is typically no involvement with a bricks and mortar clinic. One 2017 study found the median cost of mifepristone-misoprostol products ordered online is approximately $205.

Self-managed abortions have occurred around the world for years, particularly in areas where abortion access in the medical care system has been limited. Before the FDA removed the REMS requirement for in person dispensing of medication abortion, access to telemedicine abortion care (either through the medical system or self-managed) was extremely limited in the United States. Interest in self-managed abortion has grown in recent years in the United States, particularly since the Dobbs decision. For example, research has documented a sharp increase in requests for abortion pills to the company AidAccess since the Dobbs ruling, rising from an average of 82.6 requests daily before the ruling to 213.7/day after it was issued, with the largest increases in states that have banned abortion.

How Indian health-care workers use WhatsApp to save pregnant women